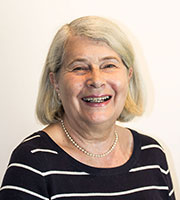 Veronica started her career as secretary to the legendary Sam Wanamaker during the early fundraising days of the Globe Theatre. From Bankside she moved to the Contact Department of the National Theatre, first at the Old Vic and then at its current home on the South Bank.

Crossing the Thames she became the RSC's Publicity Officer, based at the Aldwych Theatre. Four years later she joined Ian Albery at Omega Stage and covered all aspects of marketing and publicity from advertising and front of house display to print distribution, direct mail and compiling programmes for the productions in his four theatres.

Following eight years at Omega Robert De Wynter invited her to set up the Dewynters' Marketing Department where she worked for another sixteen years.

She is currently made's Admin Support, enjoying a wide variety of interesting tasks!